Posted on May 29, 2018 by charnwoodgenealogy

On Saturday I was at a postcard Fair in Bury St Edmunds in Suffolk when I found, in a 50p box, a lovely old family photographic postcard taken by a Chelmsford photographer, which when I turned it over was amazed to see that it had Christian names and exact ages written on the back – how could I resist the urge to buy this postcard and take on the research challenge to try and identify this family and possibly reunite it with the family – well I could not!

As you will see the names from left to right say Doris aged 12 years 3 months, Leslie 14 years and 10 months, George aged 19 years and 10 months, Olive aged 17 years and 6 months, Gladys aged 22 years and 4 months and Mum – also helpfully under Leslie’s name someone has added in pencil 6007509 TWITCHETT ‘A’ Company 5th Essex Regiment. 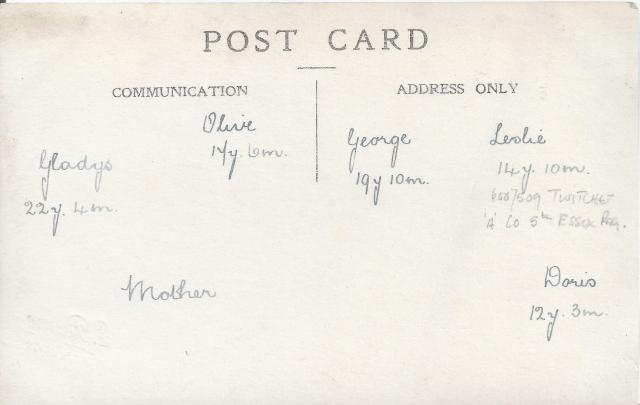 I was quickly able to find a birth record for a Leslie Valentine TWITCHETT in the January quarter of 1911 in Chelmsford Registration District – knowing that 1911 census was taken in April 1911 I hoped I would be able to find Leslie with his parents and siblings on it, which I did.

The 1911 census shows the TWITCHETT family (although incorrectly transcribed as TWITCHELL) living at 11 Chelmer Place in Springfield near Chelmsford in Essex, with Leslie aged 1.5 months with his parents Harry aged 28 a Labourer at a Stone Masons, Sarah aged 27 and siblings Gladys Ellen May aged 7, George Harry aged 5, Olive Honor aged 2, which all fit with the names on the back of the postcard.

Harry TWITCHETT, Leslie’s father, married Sarah JOHNSON in the April quarter of 1903 in Chelmsford Registration District and I have found the births of their other daughter Doris Kathleen TWITCHETT in 1913.

Harry’s full name on his birth registration in January 1882 in Toppesfield in Essex was Harry George TWITCHETT, but when he married and through his life he only used Harry TWITCHETT dropping his middle name George  – sadly on further investigation I have discovered that he died on 16th October 1916 whilst away fighting in World War 1 leaving Sarah a widow to bring up their five children. 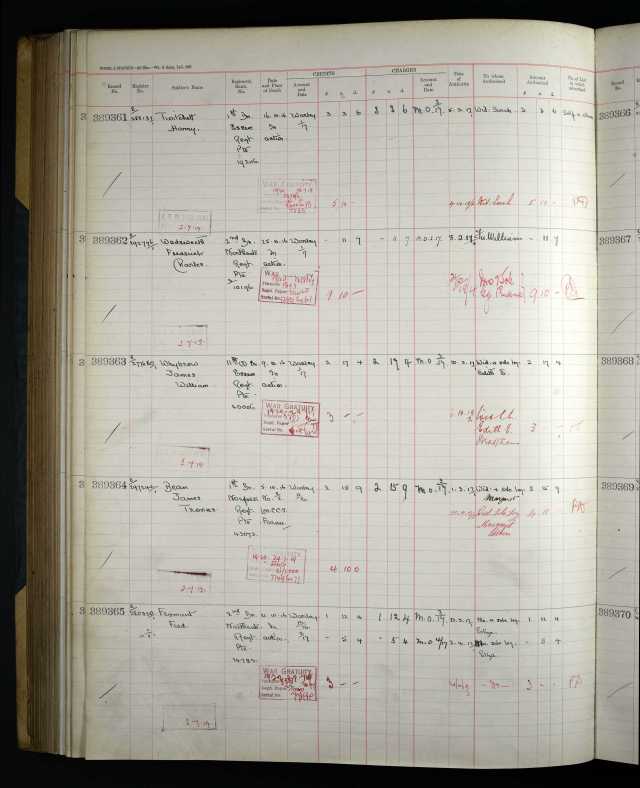 Having found the birth years for the TWITCHETT children, I would say that the photograph was taken in late 1925, nine years after Harry had been killed in World War 1.

I already knew that lots of research had been undertaken into the names on the Chelmsford War Memorial, as I have been in contact with Andy the lead researcher about a LAST surname that is on the memorial and from this know that they have put together a fantastic website – on checking the website I found a fascinating profile page for  Harry TWITCHETT, which includes his photograph and lots of information about his family and war service. The link to the website is Chelmsford War Memorial

Also included on Harry’s page is a lovely photograph of his widow Sarah TWITCHETT taken in later life, so I have now emailed Andy and sent over scans of the front and back of the old postcard so that he can hopefully include it on the website to provide faces for the names of the children he mentions.

I am also hoping that he possibly has contact details for the family member who provided the Sarah TWITCHETT photograph, in the hope that the original postcard can be reunited with a family member.

This has been some great research to undertake and I never expected a World War 1 link and to find so much fascinating information about the TWITCHETT family from Chelmsford in Essex from a postcard in the 50p box!

I will provide an update in due course if a family member is found and the postcard is reunited!