Smashing School photograph with lots of handwritten names – possibly in the West Ham area of Essex?

Posted on January 5, 2019 by charnwoodgenealogy

Another great recent old photograph postcard find was a lovely image of young men and women obviously taken at a School, as the teacher / headmaster is clearly wearing his gown in the front middle row and some of the young men are wearing very smart blazers.

The other super find was that most of the fifteen people shown in the photograph had handwritten their names on the back – would these names be enough to identify some of them and possibly the school and also date the photograph?

The surnames on the back included ROGERS, BELLAMY, MASSEY, DANCER, HANDS, RIDOUT, CLEMENTS and BEGGS and fortunately many of them had more than one initial.

The first name that stood out to me was what looked like S J A DANCER and I quickly found a Stanley John Albert DANCER born in the October quarter of 1897 in the West Ham Registration District of Essex – the 1911 census showed him, as below, aged 13 and a School Boy living at 4 Courtenay Road in Leytonstone.

The name under DANCER looked like H A THOMAS and I found a Harry A THOMAS born about 1898 again in the West Ham area and who on the 1911 census, again as below, was aged 13 and a School Boy living at 14 Ross Road, Abbey Lane in Stratford in Essex. 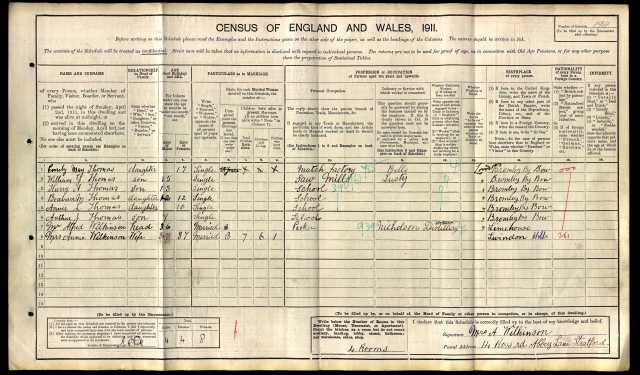 Are these discoveries the correct connection to the photograph and was the School located in the West Ham area of Essex?

I still have more names to identify, but if anyone possibly recognises any of these surnames, the faces in the photograph or possibly knows where the School could have been located it would be fantastic to hear from you.

3 Responses to Smashing School photograph with lots of handwritten names – possibly in the West Ham area of Essex?