Just a few names to get me started – do you have a CARTLIDGE connection?

Posted on February 26, 2019 by charnwoodgenealogy

A recent old photograph of a group of people provided many clues when I turned it over as the reverse of the postcard is absolutely covered in handwritten names and signatures!

It was taken by the Photographers A & L Slingsby in Grange-over-Sands in Cumbria. 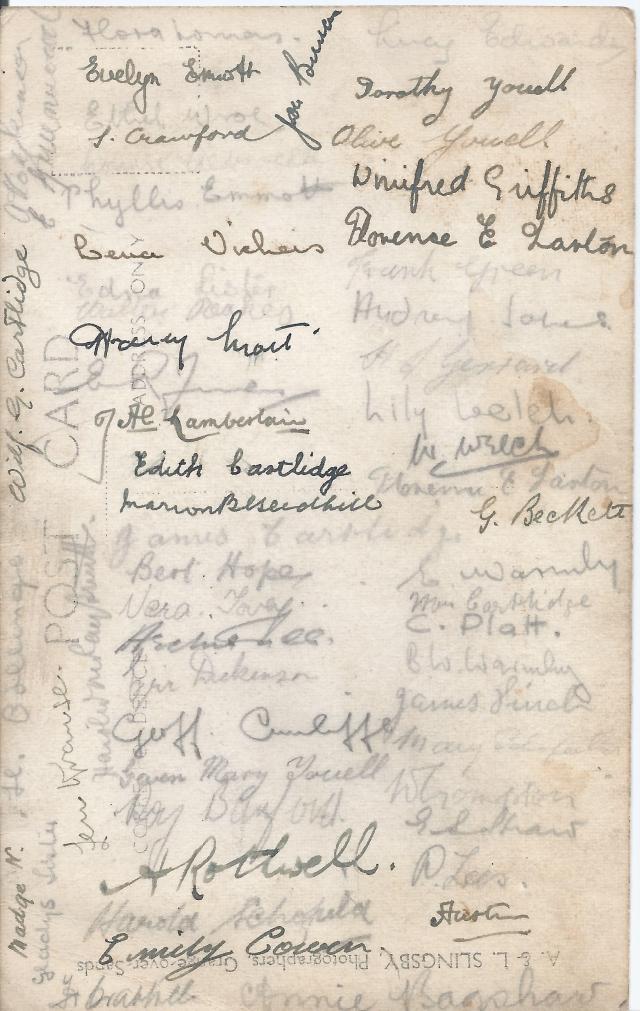 Scanning the names I could see that the surname CARTLIDGE appeared several times with names Wilf G, Edith, James and Mr CARTLIDGE – being a more unusual surname I thought I would start my search here.

I quickly found a 1911 census record, as below, for a CARTLIDGE family living at 80 High Lane in Burslem in Stoke on Trent, which had names that fitted with postcard – James CARTLIDGE aged 38, a Lithographic Artist, was married to Edith aged 33 and had been married for ten years and their children were Reginald James aged 8, Wilfred George aged 4 and Edith May aged 2 – if this is the correct family I think it would possibly date my photograph to the 1930’s.

James CARTLIDGE died in the December quarter of 1947 aged 74 and Edith Emily CARTLIDGE died on the 11th June 1949 aged 71 both in Stoke in Trent in Staffordshire.

As always I would love to reunite the postcard with a family connection especially as they have all handwritten their own names on the back.

1 Response to Just a few names to get me started – do you have a CARTLIDGE connection?